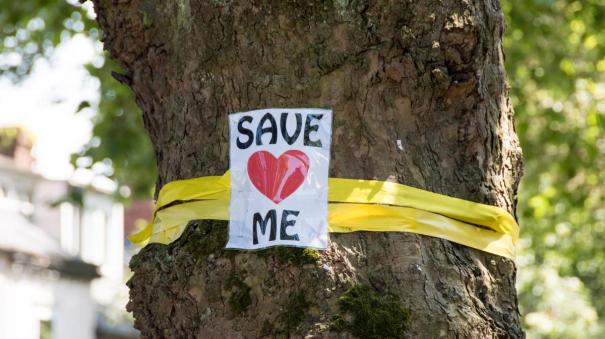 More than 110,000 trees have been chopped down in three years by councils across the UK — equivalent to a sixth of the size of Sherwood Forest.

A Sunday Times investigation, using freedom of information (FoI) requests, has revealed that Sheffield — where the council has caused uproar by felling about 10% of its street tree population — is only the third-most prolific city at felling. It is exceeded by Newcastle, where 8,414 trees have been felled, and Edinburgh, with 4,435. The figure for Sheffield is 3,529.

In mixed urban and rural areas the top tree-cutting councils are Wiltshire, with 4,778 , Kent, with 3,623 and Basingstoke and Deane, with 3,579. More than 70 councils said they did not keep records of trees felled, despite it being a government requirement.

Experts and campaigners say some councils are trying to save money by chopping down large-canopy trees, often in urban settings, which can be expensive to maintain.

Trees such as oak, lime, sycamore, horse chestnut and ash are targets because their roots can spread along pavements and cause damage to buildings and roads.

Large trees absorb harmful particulates that can lead to disease. However, housing and road schemes have led to culls in cities such as Newcastle, a city highlighted by the World Health Organisation as a pollution hotspot, one of many in the UK.

Newcastle city council has felled the most trees of any local authority in our study of 288 councils over the past three years. The council, however, claims to maintain a stock of 800,000 trees, including woodland outside the city, meaning it felled 1% of its population. It refused to give a figure for its felled street trees to allow a like-for-like comparison with Sheffield.

Belfast city council has chopped down fewer, 3,213, but this represents 6% of its stock. Basingstoke and Deane council in Hampshire has also culled 6%.

Edinburgh council has felled about 1,000 trees more than Sheffield since 2015. However, the city has been battling Dutch elm disease.

The true number of trees cut down in the UK is likely to be far higher. Many councils failed to respond to our request two months after the request was made.

A total of 288 councils responded, of which 201 provided numbers. A national total of 113,792 trees is recorded as being felled by councils since 2015.

The environment department (Defra) and Forestry Commission keep no record of trees felled under local authority powers. Defra said: “Local authorities should be keeping their own records.”

Seventy-two councils responded by saying they did not keep records. Some councils said the request was too costly to answer.

According to Defra, the number of trees cut down by councils equates to about 67 hectares, equivalent to more than 90 Wembley football pitches.

Some councils claim to have offset mature trees felled by replanting. However, experts say saplings cannot match the benefits of a mature-canopy tree.

“It takes up to 100 years for many broad-leaved trees to reach their full beneficial potential and the next 100 years to repay those benefits to its environment,” said Simon Richmond, senior technical officer for the Arboricultural Association.

“Respected research has shown trees have an impact on improved mental health, pollution reduction, physical health, flooding and temperature control. Property values are also known to be higher in more ‘leafy’ residential areas. The benefits of trees are enormous.”

He added that in some areas trees were being lost because it is cheaper to fell than maintain them. Sheffield’s tree-felling is part of a £2bn, 25-year project called Streets Ahead. Thousands of trees, assessed by the contractor Amey as dead, dying, diseased, damaging or dangerous, have been cut down.

Paul Selby, a tree campaigner, said: “Sheffield made it very obvious what they were doing, but I think tree felling can go largely unnoticed in a lot of cities. This can happen by stealth.”

Part of the problem nationally, according to Richmond, is a cut in the number of tree officers employed by councils to maintain and champion tree stocks. “They fight the battles against planning and development departments to keep trees, to cut only when absolutely necessary,” he said.

Newcastle has removed three tree inspectors to save money. The council said: “When you visit Newcastle it’s evident just how much of a green city we are. Newcastle has a proud collection of parks and open spaces.