A critique of Amey’s ‘replacement’ trees

What is the future of young trees planted by Amey in Sheffield?

by Dr Jan Woudstra, a landscape architect and historian, who also studied horticulture in The Netherlands and at Kew.

While locked into a 25 year contract between Sheffield Council and PFI contractor Amey, thousands of trees are being removed from streets, under severe protests. The claim is that trees will be replanted and this has indeed happened throughout the city, so five years into the contract there is plenty of evidence to examine.  While the argument and focus is about tree removal and replacement of sufficient numbers of trees, the question is whether an engineering contractor is actually able to care for young trees and ensure they will grow to become worthy replacements of the large trees they replaced.

The following examples demonstrate a lack of knowledge and skills of the contractors in charge of the road maintenance contract in Sheffield. Trees are living material and need special care in planting and management to ensure they thrive in the long term. The trees removed by the contractor have lived for over a hundred years, but many of those replanted since the PFI contract was put in place are dying or in a very poor condition. The examples below suggest that little or no care is taken to establish new trees, to ensure they are planted and maintained properly. Additionally, trees are damaged by the contractors through careless operations in the process of undertaking road works, such as positioning news street lights, ruthlessly cutting roots and damaging branches while, with no special care or concern for the longevity. The replanting put forward as an argument to the tree felling protests is clearly a tokenistic gesture rather than a meaningful commitment to renewing the tree stock in Sheffield. 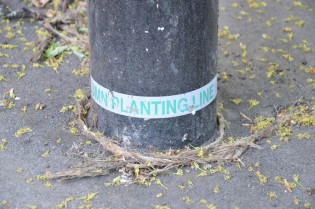 This lime tree replacing an existing tree next to 75 Crescent Road shows extensive crown dieback making it unlikely to survive [Figure 1]. The reason for this seems obvious; it has been planted too high, with the top of the roots well above ground level [Figure 2]. Unlike the lampposts that have also been placed, trees do not have an indication as to where the ground level should be [Figure 3]. It suggests that the skills of the planting force are limited.

A birch tree planted at 335 Sharrow Lane, did not stand a fair chance in its new position; the growth of couch grass in the rootball suggests that it was planted with this already present, and would have formed substantial competition with the tree [Figure 4]. It would already have been stressed since the hole – clearly visible in section – was surrounded by hard-core, showing that the pit was not properly prepared. The fact that it died is hardly a surprise. This instance therefore suggests that nursery stock was not properly inspected, and that the planting pit was not adequately prepared. Additionally there was clearly no care, no watering, and it reveals the extent of tree planting to be tokenistic, rather than showing any conviction to establish them. 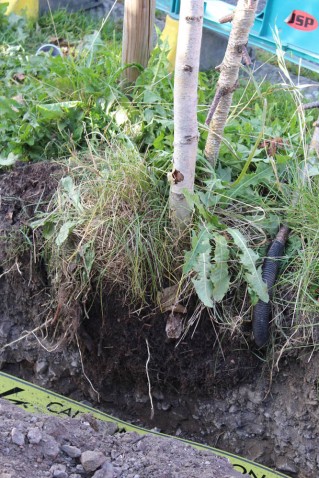 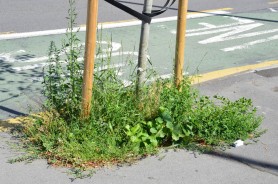 This newly planted tree at a bus stop along Ecclesall Road is struggling for establishment, and with leaves drooping it is clearly in stress [Figure 5]. The weeds allowed to grow at its base may look like a painting by Albrecht Dürer, but they provide significant competition to the tree in a fight for both nutrients and water [Figure 6]. This instance provides evidence of the limited care provided in establishment.

In placing their lampposts Amey had to dig extensive trenching along both old and young trees, which involved cutting roots. The example of this Italian alder at the corner at Chippinghouse and Steade Roads shows the devastating effect of this within a year or so, with the tree showing extensive dieback [Figure 7]. It is good practice to limit damaging effect of root removal by filling in holes as soon as possible, to prevent drying out of the soil. In this case the trenches were left open for some three months. This reveals an inadequate understanding for the requirements for tree growth. 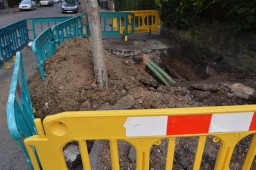 Opening a trench near a tree and enabling the roots to dry out is bad enough, but to heap up soil onto the trunk and leave it there for an extended period is bad practice as it compacts the soil and inhibits the supply of oxygen and water to the roots [Figures 8, 9 & 10]. This Italian alder was left in this condition for an extended period. It reveals that trees were not considered during the installation of lampposts. 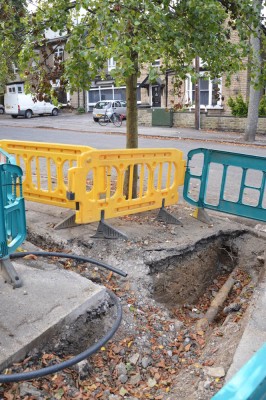 The contractors appear to have considered that concrete edgings should be introduced along newly planted trees to precede re-tarmacking of pavements at Chippinghouse Road. Instead of piling them near the area, they were positioned on top of the roots [Figure 11]. The introduction of this edging required trenches to be dug that cut roots in the top area. With most of the roots being located in the top layer of soil with trees struggling for water within tarmacked areas such removal of roots can be fatal. Ultimately timber edges were placed here, but the root damage was already done. As these edges are frequently slightly raised they also inhibit surface water flowing into the limited planting holes. It shows that there is an insufficient understanding of the requirements of healthy tree growth.

This newly planted lime tree was planted very near the kerb where an old tree had been removed [Figures 12 & 13]. This kerb was re-laid prior to re-tarmacking, involving substantial haunching to the kerbstone. This consists of a lean concrete mix that will contain various salts and chemicals which may be poisonous to the tree and remove water from the soil. The use of such materials near newly planted trees will inhibit their growth and potentially kills the small root fibre.  It reveals how young trees were not a material consideration during the works.

A new lamppost is positioned so close to a recently planted oak (Quercus robur) – at 217 Chippinghouse Road – that there will be a conflict between the two; with the removal of the existing lamppost on the other side and the placing of the new one the roots of this tree have already been cut on three sides [Figure 14]. With a bit of anticipation this imminent issue could have been prevented. This reveals a lack of foresight and planning, and also the fact that engineering issues are considered more important than existing tree stock. 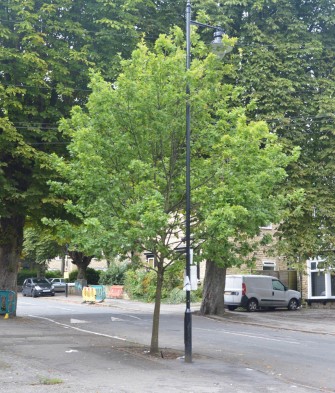 This Ginkgo biloba tree planted opposite 45 Crescent Road was replanted after another young tree in the same position died, with the tree popped back into the same hole, without investigating the cause of problem [Figure 15]. Since the tree is located in a low spot of the road this may well be waterlogging, whereas a Ginkgo prefers a drier position. The new tree clearly suffers again. It is not entirely dead, and trees such as this will take years to die. It shows that tree holes should be prepared properly and that they should be appropriately protected. But since it is not dead this tree is not a concern to the contractor and it has been left in this condition for a few years now. It shows that there is no system of adequately monitoring establishment of young trees.

While partial tree removal is still being proposed for Montgomery Road one tree has already been replanted. This young tree to the left is a plane tree (Platanus orientalis), positioned near the corner with Rundle Road [Figure 16]. This part of Sheffield is famed however for its lime trees, which are an important part of the heritage. They were planted after 1853 by the landscape gardener Robert Marnock for George Wostenholme, who laid out the Kenwood- Sharrow Estate, after he had seen such avenues of forest sized trees during a visit to the east coast of the USA. The avenues are a magnificent feature of the area and one of the main reasons why it was declared a Conservation Area. Such cultural aspects clearly are not considered of importance to the contractor, who will probably argue that the tree stock has to be varied for ecological diversity, but which provides evidence that they do not care about cultural heritage. It should be noted here that unlike the plane tree in cities, the lime is one of the most resilient trees to the effects of climate change. 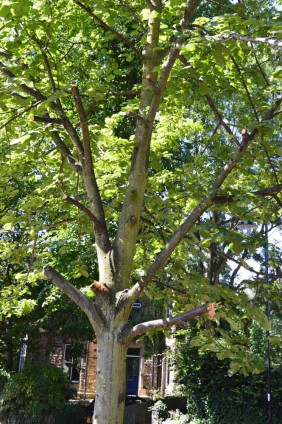 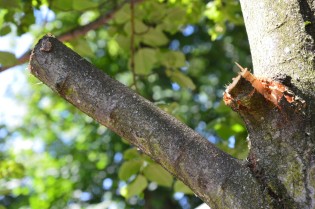 This young lime, outside 5 Kenwood Road, received some misconceived pruning by a passing maintenance gang, who did not bother about using the right equipment nor did they have any knowledge of formative pruning [Figures 17, 18 & 19]. This is clear on how stumps have been left, and how trees have not been pruned alongside or mirroring the so-called bark branch ridge, which encourages wound tissue required to prevent infection. It reveals that operators are insufficiently skilled to deal with pruning to shape crowns and encourage healthy growth.

While street trees are always vulnerable to impact, this lime tree was hit by a contractor’s lorry while backing into Crescent Road from Empire Road where it was supplying tarmac. The impact caused damage not only to the side branch, but also to the main stem [Figures 20 & 21]. While the branch was later removed by a local resident the wound is likely to provide a lasting problem to the health and well-being of this tree. It reveals an issue with adequate protection of trees during work operations.

This minimal survey of the care of young trees under the auspices of Amey in one small part of Sheffield reveals that young trees are not a serious consideration of the PFI contractor, which emphasises engineering aspects. With a total length of some 20 years of the contract left, with current management regime few trees will be able to reach anything like maturity. Beyond the issue of removal of large numbers of mature trees this is a serious concern.