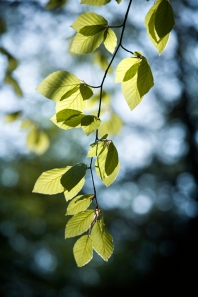 The graceful boughs of a mature Common Beech (Fagus sylvatica) hang laden with new leaves. The beech is among one of the most easily recognisable British broadleaf trees. In summer the foliage matures to a darker glossy-green, while in autumn they become a riot of red tones, young trees often retain their leaves all winter in sheltered areas.

New leaves emerging on an oak tree (Quercus robur) glow in early morning light as it catches the canopy of Ecclesall Woods in Sheffield.

The luminous yellow leaves of the Norway Maple (Acer plantanoides) growing next to Ullswater in Cumbria. Caught in the sunshine of a late autumn afternoon.

The reasons given for felling trees

Sheffield City Council (SCC) have often stated that street trees are only removed as a ‘last resort’. This reflects national best practice guidelines, which recommend that all other reasonable solutions be considered before a tree is removed – the option of last resort.  The phrase is repeated in SCC’s Streets Ahead Five Year Tree Management Strategy (2012 – 2017) and the criteria for removing trees are given in Section 3.0.

This classification system is not standard within the industry, nor is it an accepted system for categorising street trees. Regardless, some of these categories are easily addressed – STAG do not oppose the removal of trees known to be dead, dying or dangerous.  If a tree is diseased then if, after a thorough survey, felling is required for safety reasons or to prevent the spread of disease to other trees, then STAG would not object.  The emphasis is on the word ‘thorough’ and we expect the survey process to be transparent, so as to avoid repeating the mistakes made with the irreplaceable Melbourne Oak.

The last two categories on the list are where the controversy lies, as most of the threatened trees fall within this classification.  Trees found to be disrupting pavements and displacing kerbs are deemed to be damaging and the discriminatory category is primarily concerned with mobility access and other safety issues caused by prominent tree roots, misaligned kerbs and uneven walkways.

In the majority of cases where trees are deemed to be damaging or discriminatory the issues can be satisfactorily addressed using one of the 14 Engineering and Tree-Based Solutions.  These practical alternatives to tree removal are used as standard by most Local Authorities in the UK and have already been paid for under the terms of the PFI contract.  There is, however, little evidence of them being used on Sheffield’s streets.

Of course there are occasions where a tree is doing serious damage to a nearby property and removal may ultimately be necessary, however this is a completely separate issue to the delivery of the Streets Ahead highway renewal program and pre-existing problems should already have been dealt with by the council.

SCC’s Streets Ahead Five Year Tree Management Strategy (2012 – 2017) goes on to list issues that are not considered grounds for tree removal:

Anecdotal evidence gathered by STAG supporters, primarily when trying to communicate with people while out on Sheffield’s streets, shows that these last four issues are just as likely to be given as the reasons for being in favour in tree removal as the 6Ds defined by the Council.