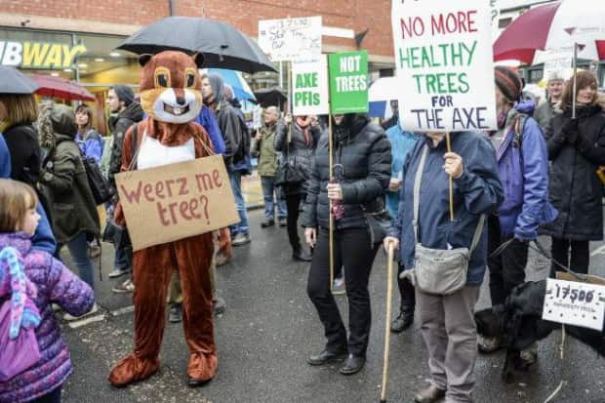 Sheffield Council has refused to reveal another key part of its official policy for the controversial felling of thousands of street trees – on the grounds that secrecy is necessary to protect staff and the public from attacks by protesters should the information be made public.

The council has rejected a request to release its annual tree management programme for 2017/18 by claiming that “increasingly intimidating and at times violent” behaviour by campaigners means publishing the information would risk the safety of both contractors and the public in areas where felling is due to take place.

According to the council’s £2.2bn Streets Ahead highways maintenance contract with private firm Amey which started in 2012, the replacement of trees with new saplings has to be done “in accordance with the annual tree management programme”.

The authority has said it now estimates around 10,000 trees will be replaced with new saplings over the course of the contract but has admitted there will be a “financial adjustment” should 17,500 not be removed.

The council response, sent on April 13 – almost three weeks after felling was paused for a review to take place following a national outcry against the policy – stated that as the programme contains details of where removals were planned to take place, publishing it would “provide information which may lead to the targeting of works sites and increase the likelihood of intimidation or physical assaults against staff and the public at those sites”.

Campaigners today said the refusal was a tactic by the council to delay the publication of information, while also being “spin” that attempts to paint protesters in a negative light.

Around 20 people were arrested between January and March at tree protests after Amey brought in private security guards to support felling operations. Dozens of police officers were sent out to support operations from February following clashes in January.

The arrests included one woman accused of a public order offence for blowing a toy trumpet at a tree protest. One day after that, a vicar carrying a tambourine and a woman with a pink recorder were both also arrested, one for obstructing the highway and the other on suspicion of obstructing a constable.

South Yorkshire Police said today one man has been charged with two counts of assault, with a number of other cases still being considered by the Crown Prosecution Service.

Benoit Compin, the main charged with allegedly assaulting two security guards in March, is to face trial at Sheffield Magistrates Court in August and intends to plead not guilty.

The council FoI response said: “The current level of tree protester action, which is becoming increasingly intimidating and at times violent against Amey employees, precludes the council from releasing up-to-date versions of the Annual Tree Management Programme due to the risk to these employees.

“Amey, and as contracting organisation, Sheffield City Council, have a duty of care to its employees and to release a programme which details where in the city staff are likely to be working throughout the year would conflict with this duty of care by enabling protesters to target work sites.

“The council considers that this documentation therefore is exempt from disclosure in order to legitimately protect the health and safety for Amey staff and in association the public at sites where works are planned.”

Tree campaigner Justin Buxton, who was charged in March with obstruction of the highway at a tree-felling protest before the case was discontinued by the CPS days before it was due in court, said: “This is a last ditch attempt by the council to do something which serves two purposes. It delays the publication of the annual tree management programme. But it is also a little bit of spin to make out the protesters are violent and cause civil unrest.”

The council also rejected requests to see the annual tree management programme for the years between 2012 and 2016 on the grounds that it intends to publish this information at an unspecified future date.

It comes after another key element of the contract, the Highway Tree Replacement Policy, was revealed by The Yorkshire Post earlier this month following a separate Freedom of Information battle with the council.

That showed the replacement policy focuses on minimising maintenance costs for new saplings while containing no mention of existing trees only being replaced as a “last resort” as the authority’s leaders had repeatedly claimed in the past.

Campaigners have requested an internal review of the council’s decision to refuse their FoI request.

When contacted by The Yorkshire Post, Sheffield Council said its position on the issue “remains the same” as what was written in the FoI and it had nothing further to add