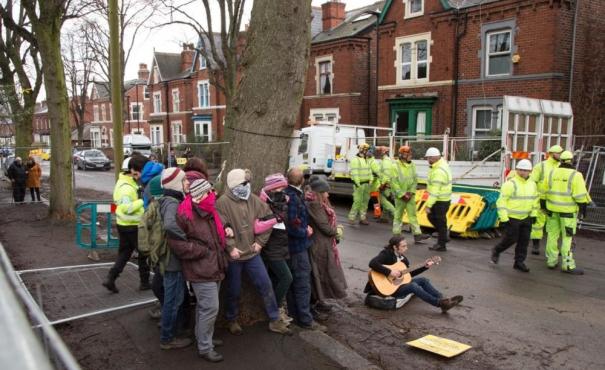 Sheffield Town Hall has provided the impetus for a new, inspiring activist campaign. It echoes past successes including the Kinder Trespass movement and even the Suffrage Society. But with the groundswell to stop the cutting down of city trees, the Labour council has found itself on the wrong side of history, writes NATALIE BENNETT

Michael Gove, seeing a groundswell when it rolled towards him, has evenappointed a “tsar” with responsibility to protect street trees.

Town Hall, there’s a plaque commemorating the Kinder Trespass – a local action that led to a major national change in the people’s access to land.

The city was also the location of the nation’s first suffrage society – beginning the campaign that would take the first crucial steps towards women being recognised as equal citizens with men.

But I’m sure that the Save Sheffield Trees campaigners weren’t thinking so big when they started, years ago now, to protest, and then stop – sometimes with their bodies and at risk to their liberty – the felling of thousands of healthy street trees.

They were thinking about the health impacts on the people of their city, about the loss of personal and community history (particularly but not only with the war memorial trees), about the loss of refuges for nature – and about the unique, wonderful character of many of the threatened trees.

They started with the local and now news of their actions has spread around, fuelled by the dictatorial ineptitude of Sheffield Council and its multinational contractor Amey(notably the now infamous 5am Rustlings Road raid).

And they have become the focus, the impetus, and sometimes the inspiration, for campaigners around the nation and beyond to identify the problem of the felling of healthy street trees in their communities, often for narrow financial savings for councils and contractors, to the great cost of the rest of us.

A Sheffield street tree, the Chelsea Road elm, finished second in a national Tree of the Year competition on the BBC.

As I’ve charted the increasingly farcical attempts of Amey and Sheffield Council to destroy the public good in the city in the interest of private profit, I’ve had people from around the country getting in contact to say “the same is happening to street and park trees in my community – what can I do?”

They’ve been excited to see the publicity the issue has got in Sheffield and wondered how they can get the same.

That’s not easy – the passion with which the Labour council has lined up behind its multinational contractor and sought to victimise the tree protectors, including a Green councillor elected on a manifesto of supporting residents protecting the trees, is unlikely to be replicated anywhere.

And the cost to the protectors in stress (the threat of prison and swingeing fines), time and energy, is not something you’d wish on anyone. But the impacts of the conflict in South Yorkshire have been felt far beyond the city.

It has clearly been a driving force for national non-government organisations – notably Trees for Cities and the Woodland Trust – to really step up their efforts to chart the beneficial impacts of street trees and campaign for their retention.

And even charities that haven’t necessarily been known for their campaigning sides, from the Sheffield and Rotherham Wildlife Trust to Butterfly Conservation, have stepped up to the plate to defend the city’s trees.

And its has inspired new campaign groups around the nation – one that I’ve noticed being particularly active is South Tyneside Tree Action Group, but there are many more.

In Bristol, a similar campaign started in 2006 has taken a different path, with the council being far more cooperative and prepared to learn from civil society.

In the way of the media, the innovative, world-leading tree strategy that has emerged has got less media attention than the conflict in Sheffield, but it forms an important balance to it, showing what is possible.

The Sheffield case has galvanised the national media to look beyond South Yorkshire. The Sunday Times ran a huge piece including a league table of councils around the country and their record on street trees.

Michael Gove, seeing a groundswell when it rolled towards him, has even appointed a “tsar” with responsibility to protect street trees.

The personal cost to campaigners in Sheffield has been high, but one of the rewards is to see a new national awareness of the value of street trees to human wellbeing, and new structures, institutions and practices, growing up to protect them.

In Sheffield we’ve lost thousands of healthy street trees, which cannot be replaced – and the council, despite slightly softer rhetoric, is showing no sign of getting the value of street trees. But the rest of the nation is.

We’re better off as a result. And Sheffield will have to catch up eventually – and there could even be a plaque in the town hall, beside the Kinder Trespass one, commemorating their efforts.

But in the meantime, again this week peaceful protectors are being taken to court by the council, which is trying to extend the injunction against them for a further three years.

If you’re grateful to what they’ve done please extend them a helping hand if you can. Legal expenses just keep adding up.