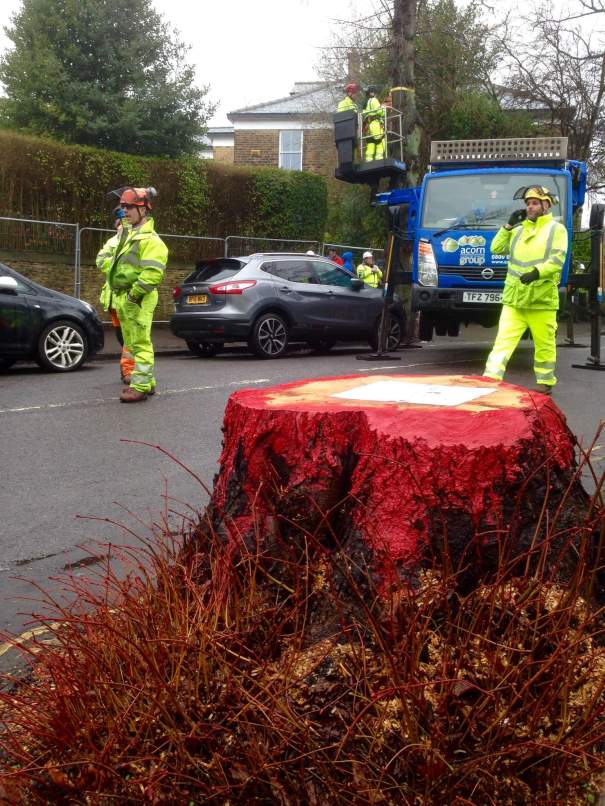 THE HIGH – possibly…
Sheffield City Council announces they are “pausing” the tree fellings for “several weeks”.
See STAG FB page and STAG NEWS FB to join in the celebration, find out the details and have your say in all the (rather excited) discussions.
Very pleased and it’s time to talk but SCC do remember, be straight with us, WE ARE NOT GOING AWAY.

LOWER – because…
Right now let’s look at what Sheffield City Council ACTUALLY said in their announcement:
“Since 2012 we have been carrying out the biggest investment Sheffield’s highway network has ever seen, resurfacing the majority of roads and pavements across the city.
(BLOWING THEIR HORN)

“However, in the past year or so the actions of a handful of people unlawfully entering the safety zones where tree replacement work is being carried out has meant that it has become increasingly difficult for Amey to complete the programme without danger to staff and members of the public.
(Same old, same old, “ONLY A HANDFUL OF PEOPLE”)

“In the interests of both residents and staff, Amey are exploring options for completing the work and will present these options to the council. During this review period, only trees which are dangerous will be worked on.
(DOES NOT sound like talking to all relevant groups to find an appropriate solution to me)

LOWEST – Rock bottom actually.
Today Benoit was due in court at 2:30pm accused of assault during a much disputed incident on Abbeydale Park Rise. He was called by the police and told that his court appearance time had been changed and brought forward to 9:30am.
When he arrived he asked which court his 9:30am court appearance would take place in.
He was told he was not on the list for the morning.
Puzzled by the British legal system he went back outside to be met by FIVE plain clothes detectives who arrested him for another offense, slapped handcuffs on him and carted him off to Shepcot Lane to sit in a cell for some hours. We do not yet know what the second offense is.

Tricked, not given his day in court and arrested by five police.
This is the lowest today.

POWER TO THE PEACEFUL
BENOIT WE SUPPORT YOU
WE ARE NOT GOING AWAY.