The city where sanity has turned to sawdust | The Times 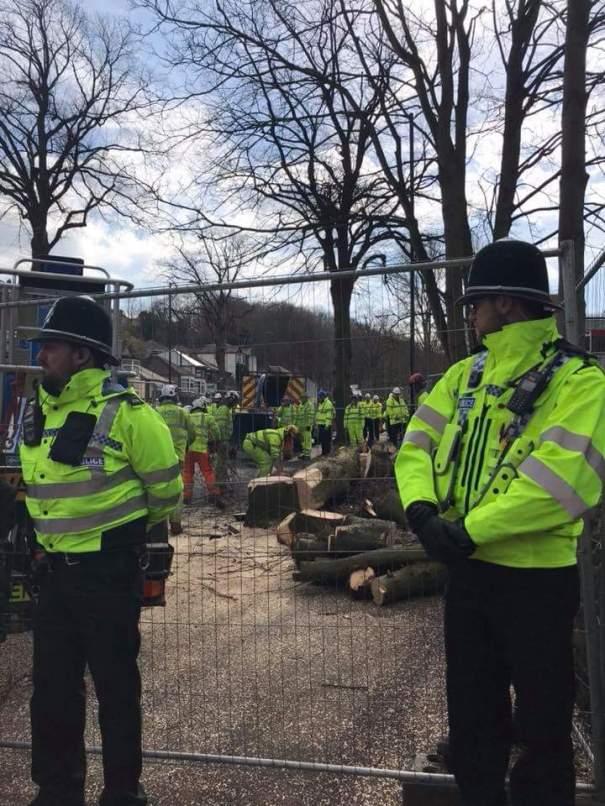 Sheffield council’s blockheaded destruction of its glorious trees is the worst of philistine, Stalinist, municipal Labour.

It had the air of a public execution. One where the condemned was innocent, the crowd aghast and even the hangman looked ashamed. The 90ft lime was the sixth tree to be felled on Chatsworth Road: healthy, blameless, 100 years old but destroyed just the same.

Sheffield’s Labour council, we learn this week, has a target to cut down half its street trees. Yes, a target, regardless of actual need. A £2.2 billion highway maintenance deal with the private company Amey specifies that 17,500 trees must fall. Otherwise, Amey or the council or both — we don’t even know since, scandalously, the contract is redacted — may face financial penalties.

Yet one thing is certain: Amey is coming for the trees. In Sheffield’s leafy residential streets yellow ribbons flutter. Around a grove of ornamental cherries, so loved by residents they bear fairy lights all year long; around the Vernon Oak which predates the city and once marked a field; around a rare, disease-survivor elm; around every elegant London plane on Ladysmith Avenue except one. All doomed.

But why? Amey claims they break up pavements, making them impassable for wheelchairs and prams. But the yellow-ribbon trees I see have, at worst, pushed out a kerbstone. Amey is supposed to offer “engineering solutions” for such trifles and only fell as a last resort. My own street has towering limes and even hard-up Southwark works around them. Indeed, several tree officers of London boroughs have expressed professional disgust at Sheffield’s civic vandalism. Yet, locked into this insane contract, still the chainsaws whine.

Amey arrived early on Thursday morning, blocked Chatsworth Road, erected steel barriers to cage the condemned tree. Guarding inside were Amey’s ten private security guards, burly Scottish ex-nightclub bouncers. Guarding outside were 24 South Yorkshire police officers. Whole van-loads! Enough to convict a Rotherham grooming gang. Instead they faced about 20 protesters, one dressed as a squirrel. These aren’t Swampy social justice warriors: most are pensioners or parents, those free to hurtle across the city at short notice, or just ordinary residents suddenly politicised by the travesty on their street. One of them, Ann, is in tears: she’d sat under this tree from 6.30am protecting it for weeks, but this fatal morning was at work.

On Wednesday a woman was arrested for blowing a plastic trumpet, so today everyone has turned up with kazoos. Despite the good-natured atmosphere, feelings have hardened since the Battle of Rustlings Road in 2016 when the council, ignoring the explicit findings of its independent tree panel, cut down eight healthy mature limes. Now protesters are often arrested for aggravated trespass then, as a condition of release, must not attend another protest. Some face hefty legal bills. On a snowy day, police called social services to menace a mother who’d brought along her child.

Later, after the chipper has pulverised the twigs, and lumberjacks are lopping off the trunk, slice by thick slice, I watch an older woman called Jackie, one arm in a sling, the other clutching a pink, plastic recorder, being bundled into a van. Her friend, a lady vicar, shouts “Hang on, Jackie, you’ve got my house keys!” and is arrested too for allegedly assaulting a policeman with her tambourine. It would be comical if it wasn’t so sad.

The protesters cite studies on how trees absorb pollution, release oxygen, calm troubled urban souls. But ecological benefits are not the true issue here. People just love old trees: these giants who were here before us, whose roots reach into our history, who will outlive us all. They are daunting yet vulnerable, quotidian yet irreplaceable. It’s about beauty and not everyone sees it.

Not the angry man on Chatsworth Road who tells me he’s glad to be shot of the bloody tree. Its sap coats his car, its leaves clog his guttering and cost him £70 a year. Some Sheffield people can’t see the problem with the puny replacement saplings Amey will plant: tidy, cheaper to maintain. They’ll be even happier when someone invents wipe-clean, plastic trees.

That same philistine utilitarianism infests the most Stalinist strands of municipal Labour. Tear down the art deco cinema, kill the villagey skyline with an overbearing block, carve a vast highway through the valley fit for ZiL limousines. The working class needs roads and houses and non-slip, leaf-free pavements; only the middle class would complain.

Yet this mysterious, utterly needless Sheffield tree affair has a David Peace novel, northern gothic air. Why must the contract be secret? (Only a protester’s FoI request revealed the 17,500 target.) How can so much police manpower, paid for by Sheffield citizens, be justified to enforce a private contract? Why does the council press on, even accelerating the felling, against such an outpouring of anger and grief? This is the heavy-handed, political opacity of Russia or Naples.

But South Yorkshire is a virtual one-party state: lack of opposition scrutiny led to Rotherham abuse scandals and the backhanders of Donnygate. Labour holds 56 out of Sheffield’s 84 council seats. The council leader, Julie Dore, has ignored entreaties from local MPs, Michael Gove condemning the destruction as “mad and bad” and turned down offers by the shadow environment minister Sue Hayman to act as mediator. She refuses to answer questions about trees.

Meanwhile in Chatsworth Road the barriers come down, the lorry rumbles off, carrying the body of the old lime turned to lumber. The avenue planted by Julie Dore’s civic forebears has another gaping hole. One more yellow ribbon left on this street, but thousands elsewhere. “Shame on you!” shout the protesters at Amey, the council, the police, and we all stare at the bare stump with sawdust in our hair.